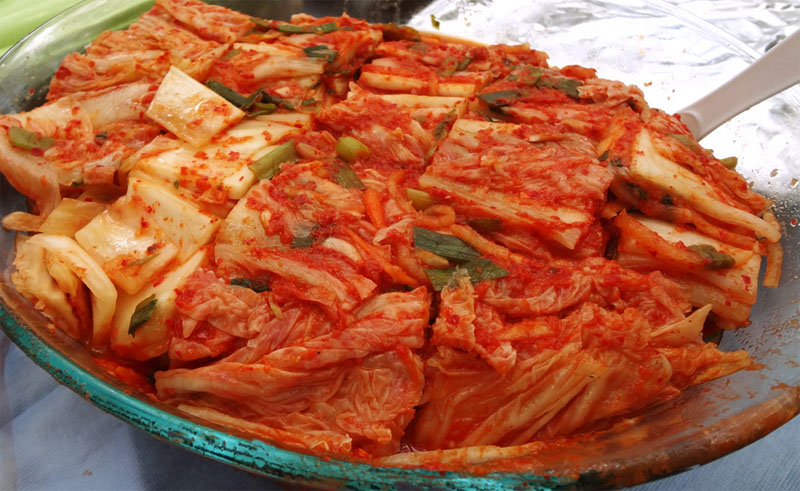 Kimchi is a spicy pickle that is a main staple in Korea. It’s actually the official national food, and I am told that it is served with every meal. Almost every restaurant in Korea, even many that serve ‘Western” food, offers kimchi as a free side dish complete with unlimited refills. I’d find this a more appealing option than the free bread usually offered by restaurants in the United States.

You can think of kimchi as a relative to sauerkraut. Sauerkraut is shredded cabbage that is brined and fermented just like its Korean counterpart. Because of the fermentation process and live cultures, it shares a similar sourness and pungency. Early Korean immigrants to the U.S. would often eat sauerkraut as a substitute.

Kimchi is typically prepared a bit differently than sauerkraut. Although kimchi is made in diverse styles and with varied ingredients, there are some common patterns. Kimchi recipes typically call for pre-soaking vegetables in a 5% salt brine by weight for eight to 12 hours. The vegetables are then drained, sometimes rinsed, and mixed with a paste of garlic, hot pepper, onion and ginger.

However, Kimchi is a bit harder to define since it is generally dominated by one particular vegetable such as Napa cabbage, daikon radish, or another sturdy vegetable. The main vegetable generally reflects what’s available that season. For example, Napa cabbage is called paechu kimchi and is the most common type made during the winter.

Have you ever bought a bottle of fermented kimchi and had it spurt out of the bottle as you opened it? If this hasn’t happened to you, consider this fair warning and open a new bottle in the sink to minimize the mess. (You’re welcome). It turns out that the fizziness  associated with some kimchis is a result of some serious carbon dioxide production that typically occurs in the early stages of fermentation. I especially enjoy the effervescence of a nice bubbly kimchi. Just be careful opening that jar, kimchi can stain.

South Koreans eat about 40 pounds of kimchi per person annually. The average American consumes anywhere between 150 to 170 pounds of refined sugars in one year. Perhaps we should consider replacing some of our refined sugar intake with kimchi to improve our health?

When  Korea sent its first astronaut (Yi So-Yeon) to the international space station in 2008, she brought a specially formulated kimchi. The Korean government spent millions developing a kimchi that would not become dangerous due to the conditions in space and wouldn’t make the non-Korean astronauts uneasy with its odor.

Kimchi is rich in vitamin A, thiamine (B1), riboflavin (B2), calcium, and iron. Kimchi also contain probiotic lactic acid bacteria and even has a strain called Lactobacillus kimchii.

Koreans love their kimchi so much that they invented a refrigerator designed specifically for storing kimchi. The kimchi refrigerator became commercially available in 1985 and it’s purported that roughly 80 percent of Korean households possess a kimchi refrigerator. They can store over 100 heads of cabbages of kimchi. These refrigerators are pretty nifty; they tend to run colder (32°F to 41°F), with more consistent temperature, more humidity, and less moving air than a conventional refrigerator, providing the ideal kimchi fermentation environment. This sure beats the traditional method of burying a kimchi-filled crock in the ground.

There is an entire museum in Seoul, South Korea dedicated to kimchi. The Kimchi Field Museum is exclusively dedicated to kimchi’s history, its varieties, and its importance to Korean culture and cuisine. It is open to anyone who is willing to learn about kimchi. The museum collects data for kimchi-related resources and statistics and also offers related activities, such as kimchi-making and kimchi-tasting. You can even observe the Lactobacillus bacteria in kimchi through a microscope.

In 2010 there was a kimchi crisis. Bad weather halved the amount of Napa cabbage normally produced and caused the price to rise by almost 6 times (about $2.50 to $14.00). The government had to step in and subsidize the cabbage for its citizens.

My Korean neighbor told me that as a child, her father received an annual “kimchi bonus” from work so that his family could make their base kimchi supply. It was common for the women in the family (aunts, mothers, sisters, daughters and grandmothers) to gather and spend a late fall day preparing the cabbage-based kimchi to ferment during the winter. A properly stored batch would easily last the year without spoiling. I’ve found that it can actually last up to 2 years if stored properly (maybe even longer).

Kimchi is a key ingredient in several favorite Korean dishes. Kimchi is the star ingredient in dishes such as kimchi fried rice, kimchi pancakes, kimchi soup and stew. If you haven’t tried kimchi stir-fried “cauliflower” rice, you should. It’s superb.

Are you going to dream of kimchi tonight? I know I am! I’d love to have a gluten-free kimchi pancake in the morning. Are a heaping of Kimchi Stir Fry Cauliflower rice What about you?